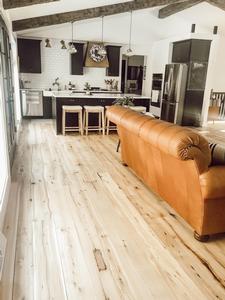 Our Rock Elm flooring is milled from salvaged barn sleeper beams, meaning no mortise pockets or peg holes. There are some rare occasions when the barn was being built that a mortise pocket, peg holes or nails were necessary for perhaps rungs of a ladder, hooks for tools, etc. AND on the very rare occasion, we'll be lucky enough to discover spalting during the cutting process. You'll notice these rare features are showcased and highlighted in the Winneconne home to celebrate the history, heritage and preservation of our American Midwest Barn.

Stylistically, our plank floor can be paired with fixtures and furnishings that span industrial and rustic to elegant and refined. While many of our customers, both residential and commercial, choose this style of floor for it's strength, durability and visual appeal, no two can ever be the same! And like your favorite pair of old jeans, our floor has history and becomes a personal work of art that cannot be duplicated.