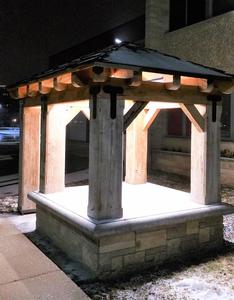 (For best viewing from laptop, double click photos to expand.)

The Subject: a bronze fire bell reclaimed in the 1960s from the combination Oshkosh City Hall and Fire Station was donated to the Oshkosh Public Museum

The Idea: Display the bell prominently for the public to appreciate and enjoy

Can you IMAGINE the size of the tree it would take to fell for a massive, center cut 13" x 13" beam, then x 100s to build a factory? THEN can you imagine a 105 years later, these painted, dirty, gritty, just brutally ugly beams being salvaged, cleaned and used in numerous projects to preserve and continue our history and heritage? It's not what you look at that matters, it's what you see.

Doug fir beams are available for your project! See our PRODUCTS for timbers and beams.