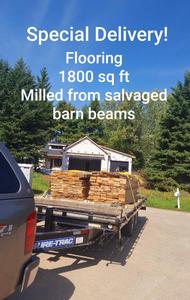 Oct 2020
New house construction - fresh start filled with hopes and dreams. This young couple managed their new build well. After working with us, they took a leap of faith and trusted that they could install their remarkable floor, even though they had NEVER done ANYTHING like this before! In a few short months, their brand-new baby will be crawling on this magical rock elm and mixed hardwood floor that is truly a unique work of art. Their courage allowed them to forgo “luxury laminate” and installation while staying within their budget to create one of the most important aspects of their home. We believe, by making this choice to partner with us, they will someday experience the joy of grandchildren crawling on this same floor. Now that’s preserving history and heritage!

Stylistically, our plank floor can be paired with fixtures and furnishings that span industrial and rustic to elegant and refined. While many of our customers, both residential and commercial, choose this style of floor for its strength, durability and visual appeal, no two can ever be the same! And like your favorite pair of old jeans, our floor has history and becomes a personal work of art that cannot be duplicated.

Our knowledge and services are being called upon more than ever by those who wish and insist on taking a more active role in their build process to create a home, workplace or gathering place that preserves their own legacy.