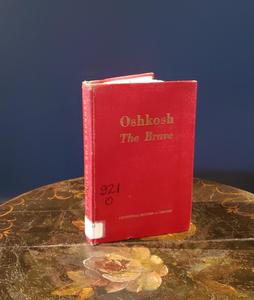 $125.00 Free Shipping Product Description:
A RARE and collectible book of Oshkosh history, SIGNED by the Author!!, Phebe Jewell Nichols, wife of Angus T. Lookaround, a Menominee. Ms. Nichols/Lookaround (she uses both last names within the book) acknowledges that most of the book first appeared as articles in the Oshkosh Northwestern, a newspaper formerly based in the city of Oshkosh, Wisconsin.

The foreward is by Roy Oshkosh, who claimed to be the "Nominal Chief" of the tribe that was in the process of being terminated in the 1950's.

As Oshkosh The Brave: Chief of the Wisconsin Menominees, and His Family was published in 1954 it became, according to Roy Oshkosh, "the finest work of portraying the true life of my ancestors and our people, which was fast becoming a lost chapter in American history."

According to Oshkosh The Brave:

The old Menominee Chief Tomah died in 1818. The tribe had no leader, rather, they had two emerging leaders, Josette who was Tomah's son, and Oshkosh, a young man who was also mentored by Tomah. The two young men got along well and the tribe went through a period of mourning the old chief before choosing a new one.

While Tomah had been an ally of the British, the new chief would have no choice but to deal with the United States. Although there were a few minor Menominee chiefs that were persuaded to sign agreements with the US government in the years after Tomah died, the documents didn't amount to much because the minor chiefs really didn't have the Menominee people behind them.

By the 1820's General Lewis Cass was both Governor of Michigan Territory and the Commissioner of Indian Affairs. Nichols/Lookaround describes it this way:

The Menominees would have to eventually give up their domain, and Cass wanted it as painless and legal as possible. He called for a treaty making meeting at Butte des Morts in 1827.

One thing about treaties is that you have to have the leaders of both parties sign a treaty and this, of course, cannot be done if one of the parties doesn't have an official leader. So General Cass spent three days talking with the Menominee people, essentially trying to determine if the next chief should be Oshkosh or Josette.

And that is how Oshkosh was chosen to lead the Menominee people through some of their toughest times.

$125 FREE SHIPPING Product Disclaimers:
Shipping and handling charges are not reflected in the purchase price, unless stated in the item description. Please call or email us with any questions, including shipping quotes, before purchasing an item/s. Save shipping costs by picking up your purchased item/s at our Oshkosh, WI location! Due to the unique nature of salvaged materials, all items are sold "AS IS". Your business is very important to us! We do the very best we can to describe and photograph each item thoroughly. All sales are final. 20% restocking fee if item is purchased and shipping quote declined.